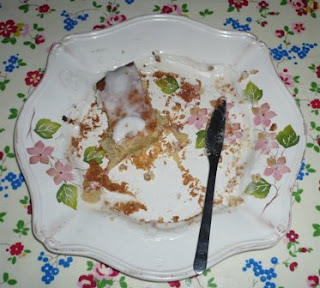 I was hoping to start this post with an impressive photo of my lemon drizzle cake. Unfortunately, it was made on Saturday and this was all that was left by Sunday. It’s quite flattering the way it vanished I suppose but it isn’t quite what I was aiming for.
Also unexpected this week, we went to see Lenny Henry at the Theatre Royal. (Well we had tickets and everything so that bit wasn’t unexpected) I think we thought we would just see straight stand up with a bit about the music he likes. It was a bit of a surprise then, when he began talking, in a really wistful way about how much he would have liked to have a second career in music. Unfortunately, that fell apart when he went to see Trevor Horn who told him that he wasn’t committed enough and he would never make it. Made me think a bit about doing the things you really want to and how much you need to commit to putting the effort in. Challenged me on a few things. Not rocket science I know but still sometimes you need to be reminded that if something is important enough it needs work and continual commitment. Can’t say I feel sorry for Mr Henry though. At the end of the evening he got over his regret by bringing on a three piece band and belted his way through James Brown covers for three quarters of an hour. So a good time had by all.

Conversation between Head of House and Yours Truly at beginning of Lenny Henry gig.
HOH: John Bishop is here
YT: John Bishop the comedian?
HOH: Yep he’s there at the back.
YT: Oh yeh. I can see him.
HOH: Wonder if Dawn French is here tonight?
YT: Can’t see her. Suppose she would be sat with John Bishop.
HOH: Sooo. You’re saying all famous people know each other.
YT: Er. Possibly.

And on that note that leaves me looking particularly stupid. I leave you with some things the young people are looking at on t’internet. 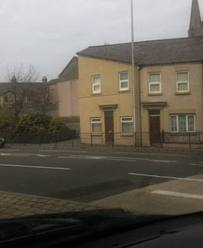 On a slightly more edifying note. This http://humblebeast.com/g-o-s-p-e-l/ links to a “sermon” –  . I know I’m probably a good 35 years older than the target audience but quality will out. Its very good. 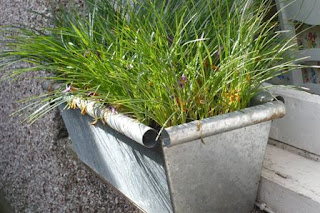 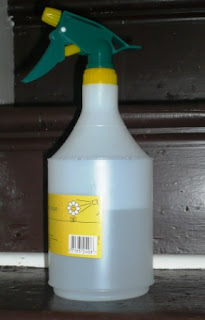 Well not destruction exactly,just a squirty water bottle. A bottle which can be directed at an unruly dog and squirted – making him unhappy and  hopefully obedient.We have decided it’s time for a bit of Jack discipline in this house and, following on from reading the spiritual discipline book, it seems that some of the principles you could apply to overcome a human habit also apply to dealing with a barky dog.

Of course, there’s not very much spiritual here. He’s only a Jack Russell and there’s a limit to how far you can stretch the analogy. Still quite interesting to compare and contrast. I only wish Morecambe was as keen on the process as we are. 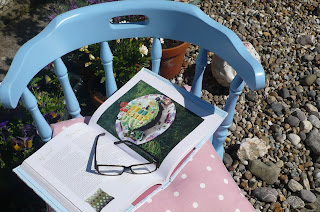 Lo and behold it getteth warmer and sunnier. I did try and do one of my favourite things  – see above re garden, book and  brew but the truth is its still quite parky really and too much time outside leads to frozen fingers. Witness lunch today. Husband, Lord and Master breaks up my humdrum working day to take me for pasty in the park. My how we live. Anyway, I’m quite happy – they’re nice pasties. Still, couldn’t sit very long. Nose was getting redder and redder. Moved on to buy chocolate thereby keeping warm and having little chocolate treat to see me through the afternoon at work. Still, Spring is definitely giving the whole arriving thing some thought.
Reading about spiritual disciplines. More interesting than it sounds. The chapter about prayer is especially good. Has lots of ideas about praying that challenge all my prejudices. One idea is to resolve to pray for one particular issue for 30 days non stop. (Well not non stop, I have to go to work and things but you know what I mean ) A part of me thinks this is like setting a deadline for God which is disrespectful but, as I have a few things going on at the moment, I am thinking I would like to give it a try. And, if God thinks I am out of order, he can just ignore me. No harm done. Except to my faith. and my life. Oh well.
Rushing out of house to Communications Team meeting on Monday night and shower unit exploded – literally. Yes really literally for once. Always happens when you are in a hurry. Now we have no shower. Baths all round now till we get it sorted. Twelve foot tall son baths like Flipper the dolphin thus doubling damp potential in bathroom. Do you only stop worrying when you die? 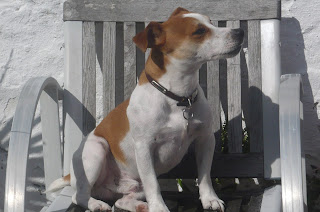 The sun is out in Devon (today anyway) and Mad Dog is as pleased as anyone. I have spent some of the week at a Community Transport Conference in Manchester (any more of this and people will think I am a real manager) so thoughts are a bit random again. (No change there I hear you cry.)
Returning to Manchester was good. Had some nice times with family and friends in the evening – after working hard all day and networking for England in case my trustees are reading this. Stayed in the Midland Hotel which was very nice indeed. I managed not to touch room service or the mini-bar. A hotel breakfast is surely one of life’s lovely things. “Coffee or tea madam? Brown or white toast? Help yourself to the buffet.” These are some of the nicest words in the English language.
Anyway, I’m not the only one gallivanting. Head of House and Senior Sprog have just got back from looking at York University. The boy completely loved it and that’s where he wants to go. You must not think that my frequent hysterical sobbing means that I am remotely troubled by the fact that this is about as far north as he could go without leaving the country. I love York too but this seems a bit of an extreme course of action to make sure that we can all get tickets for the panto. (BTW – York Panto – best in the country. No discussion. Although any information in comments about York gratefully received) Senior Sprog’s results so far are good. He has the offer. He’s going I think.
Finally, some culture. I don’t want you to think that I’m any kind of expert on Shakespeare because I’m not. Believe me, you couldn’t be living here. Most theatre companies treat Plymouth like Narnia – only further away. But this week we were visited by the National Theatre who presented us with Hamlet. It was in modern dress, set in a kind of police state, giving it a completely different perspective. Rory Kinnear was as amazing as everyone said but there wasn’t a bad performance. I went with Junior Sprog and at half time when I asked her what she thought, she was so captivated, she could hardly speak. We actually stood up to applaud at the end and I haven’t done that since I saw the Funk Brothers at the Apollo in Manchester. Quite a moment.