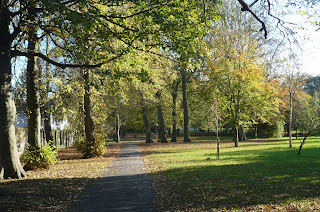 Autumn is a bit spectacular here at the moment. Warm and sunny. I have given in and started making a Christmas List. A bit. Not pressies – just all the stuff I have to do. Few more visitors than we are used to this year. Looking forward to it but I have to bear in mind that the takeaway won’t be open if I have cooking disasters so must plan ahead (for once). Head of House is looking at Master Plan to make dining table bigger by putting battons on big piece of wood to put over our table. He can be a bit strange when he’s been on nights.
I have no idea what is behind this. Maybe too much Cadbury’s Wholenut but I have been thinking about Uncle George. When I first became a Christian, Uncle George was one of the first Christians I met. He wasn’t really anyone’s uncle. I don’t think he had much in the way of family but everyone called him Uncle George. In the olden days, when you first became a Christian it was practically compulsory to be route marched into the children’s work at church and told to help. I remember I was fifteen and instructed to be a teacher in “Sunshine Corner” (You young Christians these days – you don’t know you are born I am telling you) For those of you who are not well versed in the ways of “Sunshine Corner” let me explain. Well I can’t really. I have a vague memory of about twenty smallish children as I led them around a pile of chairs telling them about the Battle of Jerico. I do remember that, at the appointed time, we shouted for all the children to bang drums and tambourines and blow into their recorders as loudly as they could. At this point my friend pulled on a string attached to a chair in the middle of the pile and – well – the walls came tumbling down as they say. It was a lot more spectacular than we had imagined to be honest but I don’t think any children were actually hospitalised. I’m almost certain about that. Probably. Don’t try it at home.
Uncle George played the accordian for Sunshine Corner. Sing along now

It’s for children under ninety nine

All are welcome – seats are given free.

Lichfield(Insert name of any place in the whole world!) Sunshine Corner is the place for me”

So George would come to Sunshine Corner every Tuesday evening. He would be wearing a suit that had seen better days – his half mast pants a-flapping as he rushed in. His shirt would be a bit grubby and when you are fifteen and too cool for school – you barely gave someone like George a second thought. Yet George never missed. He was totally reliable, even though, to be honest, he didn’t like children that much. When it came to our National Conference every year George would give people free lifts to Minehead in his Reliant Robin. Driving wasn’t a particular strong point as I remember. They used to say that George had never been in an accident but that he had seen hundreds! But, if George said he would be there, he would be there. I think we all thought he was a bit odd. Not sinister odd, just George. The truth is that a lot of what happened in church could not have happened without him. But I don’t think I ever saw him up front in church or leading anything. He just got on with it because he loved God. He was as invisible as wallpaper.

I was also reminded of another story that CS Lewis tells. If you are a CS Lewis expert and I haven’t got this right, please accept my apologies in advance.

A man dies and goes to heaven. As he is being shown around by an angel. (And on your left is St Paul’s mansion. You are welcome of course but call first – he can get very busy of an evening. That sort of thing) Suddenly they have to step back as a procession is coming towards them. The man can see that the lady in the procession must be a woman of great honour as the angels are making a great fuss of her. He bows his head in respect as she passes but can’t resist winking one eye open to see who this great lady is. To his surprise he sees that he recognises her. Not as a great prophet or miracle worker but as a lady from his own church that he barely knew. She was, as he remarked to the angel, not a particularly important person. Why was she being honoured so?

The angel shrugged with some impatience and explained.

“You forget, God’s standards are not the same as the world’s standards. He measures things completely differently. She may not have torn up any trees in your judgement. Never got on the telly, never spoke at a conference, never sang on X Factor. Yet she lived a quiet life of kindness, servanthood and faithfulness. God will never overlook such things.”

Sometimes, when Bette Midler is singing “From a Distance” and is bellowing

it can seem a little intimitating I know.

However, if you are feeling a little small, a little bit ignored as you go about your life and as you do your best. It can be a comfort to realise that God watches. He appreciates and He doesn’t miss anything – not like the rest of us do sometimes. So be thou comforted as it proabably says in some translation somewhere. Have a biscuit and a cup of tea and a laugh at Kitty (as it almost certainly doesn’t say in ANY translation) You are loved and appreciated.